Welcome to the world of usability testing

Showing that usability testing actually gives you tangible data about your users and customers is an incredibly easy task. Basically, the data you get about their behaviors, actions, and problems is a great basis for introducing any future improvements to your service. Yet, some find it difficult to take such words at hand, and are reluctant to admit that usability testing will result in increased conversion rates.

Words are one thing, but data is another – many a time people are more likely to lean towards certain ideas when they have hard proof right before their eyes. We are keen to cater to that need, as we have collected 6 examples how usability can increase conversion, backed by genuine case studies which underline any results obtained in the process of testing usability. These yielded in increased conversion rates, and hopefully will allow you, dear reader, to gain inspiration to achieve the same.

What is the goal of your visitors?

A very obvious question, but sometimes difficult to answer. Figuring out what exactly people need when they visit your website or app is crucial to improving the users’ experience. It is especially important in the case of websites which have more general aims – sometimes you could focus on elements that are irrelevant to your customers’ or users’ goals.

In order to gather data about visitors’ motivation you can use Google Analytics. With the available search option you can search for certain keywords to figure out what is the organic lead that made people enter your website. Our recommendation is to conduct such studies along with user research, as that will broaden the scope of data you receive. You can go even further by focusing on customer feedback: surveys and widgets are great to solicit responses to issues you need to research.

The Weather Channel found some clouds gathering above their website and decided to combine customer feedback with usability testing to figure out what could be improved on their website. One of the results they received is that people enter the website in order to find out whether there is any danger of tornadoes in their area. Because of that, Weather Channel decided to make that information available firsthand when entering the website. What is more, because of the demographics that were keener to visit, the version of the website featuring Flash animation was actually more popular than regular one. If you want to learn more about this example, use this link.

Who are your visitors?

User personas, that is profiles of role-model users of your website, are actually pretty underestimated by most businesses, and that’s bad. A well prepared user personas database can be a valuable basis for your whole team, as they will be able to always refer to it when preparing new projects and such. Doing so is especially crucial when designing websites or apps, where online behavior patterns can be used in order to increase conversion rates.

Uncommon Knowledge, a place which trains psychologists, therapists and different health specialists wanted to redesign their website and prepare it for their product launch. They tested two versions of the website, the modern one and the old-fashioned web form. This led them to a great surprise, as against the expectations it was the old-fashioned design that was much more successful among visitors, converting 19.55% higher. Studying the target audience led them to a response why that happened. 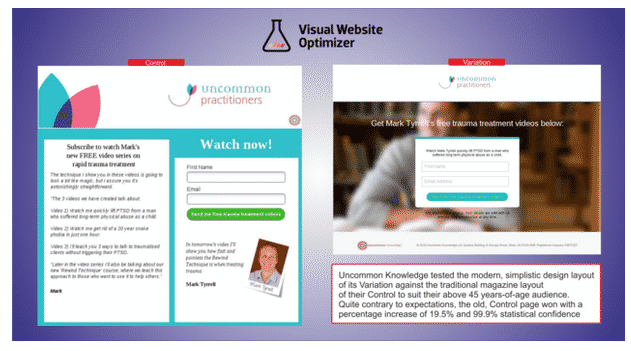 After conducting a demographics study, it turned out that the average audience age was above 45. The people belonging to that group were not amazed by the modern layout, and were more comfortable with the traditional version. Thanks to the usability test, Uncommon Knowledge learned that they need to cater to the middle-aged users. Preparing a persona would allow them to reach that conclusion even faster. If you wish to read the whole case study, click here.

What are they doing?

When you need data, Google Analytics is your way to go, especially when you want to find out certain signs that there is an ongoing issue on your website. However, even if it does tell you that something happens, there is no way of figuring out why. God bless people who asked that question and delivered various usability tools that allow us to test or record people’s behavior on the website in order to provide an answer.

Headsets.com (no intro necessary) experienced a high bounce rate which was recorded in Google Analytics. As always, they were unsure why that happens, therefore they conducted a usability test to see their users operate on the website. The biggest thorn was the website’s navigation. The headsets were organized by their type, when potential clients and returning customers actually had not enough knowledge to navigate using that criterion.

In order to fix that issue, Headsets.com asked visitors what kind of phone they will plug the headset into. This resulted in a 10% increase in conversion rates. Click here to read more.

Are your users able to achieve their goals on the website?

This question is a follow up to the questions posted beforehand. If you know what people are looking for, good, but do you know if they are able to find what they want? To do that, you can use visitor recording and remote automated tests to see the behaviors of your users which can lead you to useful conclusions. Otherwise, you can use customer feedback and ask people directly with surveys and feedback widgets.

The Polish Great Orchestra of Christmas Charity is one of the largest non-governmental charities in Europe. They receive support either through volunteers who gather donations on the streets or through their online website. However, after low responses coming from their service, they performed user tests to figure out what could be the reason. The result was that the users were actually confused by the navigation of the website. So confused, that they had no idea where to place their click in order to donate the money for the charity. This issue needed to be addressed quickly, and the Charity redesigned the website by moving the donation button higher in the side menu. They also changed the label from “Support it” to “Pay Online” – people coming to the websites already knew they wanted to donate, so there was no need to sugarcoat anything. This seemingly simple change resulted in an amazing improvement: the website donations increased by 420%!

Based on the examples above it stands to reason that the website navigation is a very important aspect. Yes, you as the creator of the website understand the logic behind its structure, but it isn’t always the case with other people. You need to study whether the navigation system on your website is clear for your visitors, and it is possible thanks to card sorting tests. They allow you to figure out what is the thinking of other people, so you can optimize the categories according to their needs.

If you are about to start a company in Delaware, you could head to Harvard Business Services which helps exactly with that. Before they decided to conduct any tests whatsoever, their navigation bar contained up to 10 tabs! That is a very large amount.

Having noticed this is a bad practice, HBS went on to improve the usability on their website and introduced changes to the bar. In order to help visitors start away, a new tab “How to Incorporate” was created, and it served as an introduction for new users. What is more, the labels were renamed to be more specific: “Form a Company Now” instead of “Get Started Now” and “Compare Prices” instead of “Compare”. Finally, the tabs which received the least amount of clicks (e.g. “Blog”, “About Us” and “Contact Us”) were simply removed. 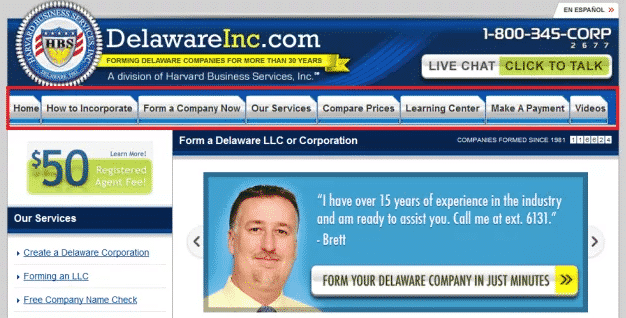 These improvements resulted in a 15.68% increase in conversion rates. Click here to read the whole story.

Are your web forms easy to fill out?

Web forms, especially in ecommerce, SaaS and travel services, are an incredibly important element of the website. Being usually a final step when completing a purchase, they need to be as clear as possible or the client will abandon the website. Form testing tools are perfect for testing whether the fields in your forms are clear enough. If there are any problems, you will be able to remove them.

Expedia, a travel-planning service, hypothesized that there is an issue with one of the fields in their transaction form, which resulted in a high abandonment rate. 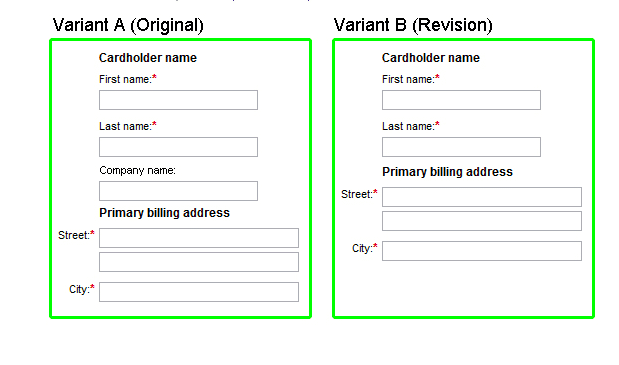 To find out what part was problematic, they conducted a study. The results of that study were that the users were confused by the fields “Company name” and “Billing Address”, as they were too close to each other. The users would usually enter the billing address into the company name field and vice versa. That led to a failed transaction and made people leave the website. By understanding the users’ interactions on the website, Expedia introduced changes into their form and greatly improved their conversion rates. See this case study to read more.

As it has been shown in the article, usability tests are not only easy to conduct, but they also result in better user experience and higher conversion rates. Continuous testing along with tests such as A/B testing and click tracking can be incredibly positive for your service. Testing yields results, so test away and reap the benefits!