The Value of Task Analysis in UX

The Value of Task Analysis in UX

Often, after a new product design was launched, you find your customers using the product differently than what you’ve expected.

It can also happen that the users’ tasks became different, resulting to go against the initial product development plan or your vision. You wonder why this happens.

In this article, Continuous Design UX, will cover how you can avoid such incidents in the future by working closely with the user task and building the best communication with the user on the principles of continuous design.

This article will also discuss the following points:

Table of Contents
An introduction from operations and design
Operations
Design
Here are the few major reasons for this change:
The fundamental parts of a design system
Design elements
Access
Documentation
Implementation
Governance
Work in progress
Common misconceptions that can affect the continuous design system in UX
The relation between design and code
Chaotic IT system and functions
Guide on what a design system should be for continuous design
Be structured and systematic before you set the system itself
Bridge the different notions into a single system
A design system should be static and an artifact
Acts as the delegator
A powerful system that can perform huge tasks
Conclusion

You need to be aware that design can be a messy, intuitive process. Working with a user task that you do not fully understand along with the changes that can influence the product, will result in launching a product that is viewed and used differently than what you have hoped for.

UX design for this matter has to go through a lot of phases until UX teams can fully close the circle from idea or intuition (of the user data needs) into something that fully or similarly resembles a complete realization.

A continuous design is highly qualitative, iterative, and has no direct relation to its effectiveness of it, as what we viewed about it.

An introduction from operations and design

Can be defined as what is happening now. This could be a system administration, user support, or business processes.

We can also say that operations are based on several different models. For example, using DevOps provides an ongoing process of feedback, refinement, and delivery solutions and presentations.

There is a loop created from research, feedback, planning, finding the solutions, and the presentation. For each of these stages, there are also tools and software that help in the work, automate processes, and ensure the constant exchange data of information and solutions.

It involves defining the actions, methods, construction, and ways to deliver the product to the end-user.

If UX researchers and UX designs can both understand the essence of an existing problem, then they can provide the right solution to their users.

These concepts are considered traditional in approach.

There are factors that exist nowadays, which affect the traditional operations-design approach that we grew up with.

Here are the few major reasons for this change:

Also, you a common there here include a shared language and change is not a technical decision.

The fundamental parts of a design system 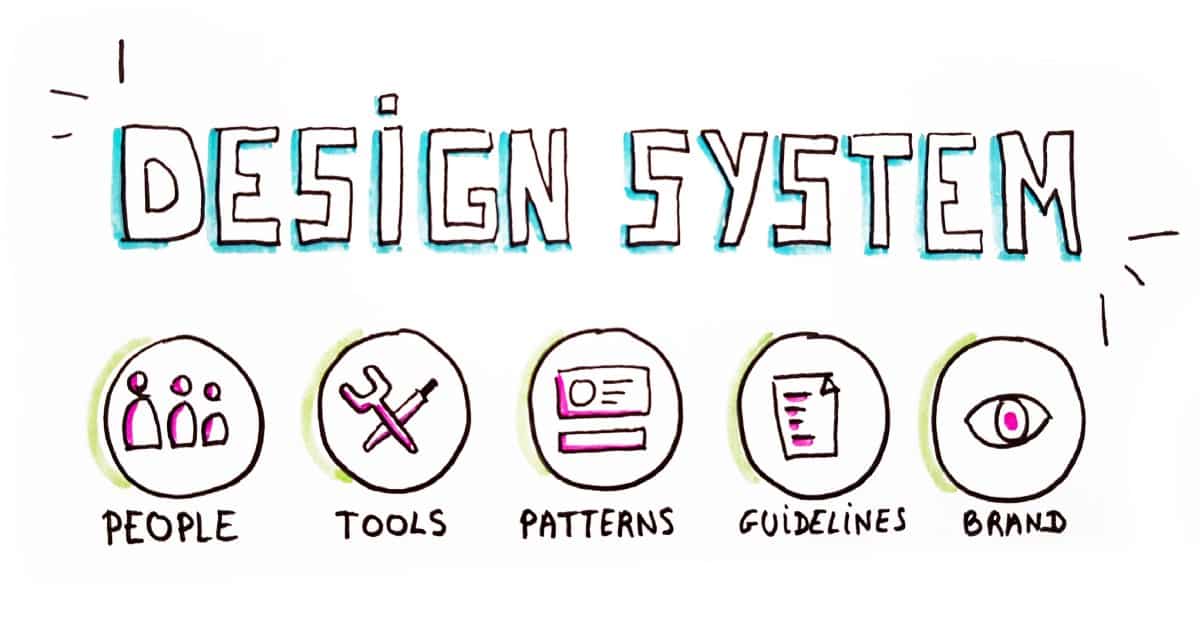 If you are Googling for more than ten seconds, chances are, you will have an overload of maps, charts, diagrams, and theories on what the crucial elements of a continuous design are.

Generally, you may find these:

A collection of design elements could mean the basics like UI components to the more vast multimodal systems in the design language, set guidelines, detailed research typography, tone of voice, and descriptions.

Is a way for stakeholders to access the design in all phases, from work in progress to production.

Refers to the possibility to display the components that should be implemented in code through simple documentation or through rich, interactive designs.

Refers to known and accepted governance models of who should decide, own, and operates the particular parts of the design system. Ideally, should be a platform-agnostic approach or research.

Enables all the UX team members to work and hand over their data and design with minimal challenges and pain.

Common misconceptions that can affect the continuous design system in UX

There has been some "dribblization" of design systems, which means that UX designers sometimes drool over the new systems coming out of a startup. However, the real use of the design system is more likely for internal use, which is a good thing.

Here are the common misconceptions that we can address in terms of having a design system in place:

One of the main tasks of a design system is to act as a central authority on the core design. It externalizes what the identity is, how it should be expressed, and it guides further use of the entire system, regardless of what each member’s role is.

The relation between design and code

We all know that digital design is necessary in today’s world, and that should be coupled with software development. However, there is a struggle when it comes to containing any unmotivated, half-baked, new testing elements.

The non-normalized variants could lead to extra work and effort, with costly maintenance, or even technical debt.

Frankly, any designed items are likely mostly coded at some point. Thus, even the design that has yet to materialized before testing is considered a future cost.

If you are going to reproduce a lot of very similar components, but are unable to make some unique design items that are clearly by presentation and logical, then you can expect to have a challenging component.

It is better to instead initially set up several house rules around what is a motivated and unique component that will keep the sum total of the design system assets under control.

Chaotic IT system and functions

Most of the products and functions provided by IT are not used in practice. And as such, resources, software applications, and software all remained unclaimed. Not all companies think that their products are really needed.

One example is the mobile development industry, which provides measurable indicators and process. While there are best practices to be found here, the statistics showed that in 2017, the company Localytics published Sql Study, which that shows 24% of applications are opened only once by its users.

It should also be taken into account that the percentage of users who opened the software application less than 10 times is only less than 63%.

If we take into account the statistics and question the stability, then it is clear that we should not draw conclusions from it.

People develop but they miss the aspect of how the product enters their lives. Most designs do not use the human-centered model, which involved a long-term customer interaction that can take years of testing.

In a customer-centred strategy, the UX designer needs to refer to existing development practices such as DevOps app, agile, or scrum that are separately applied.

If you combined these, we get something more of a continuous design, which consists of a classic principle of DevOps app and design thinking.

We suggest that you consider and adopt this to introduce the principle into the development process. It is also important to reconsider the relationship between the two concepts of design and operations.

Guide on what a design system should be for continuous design 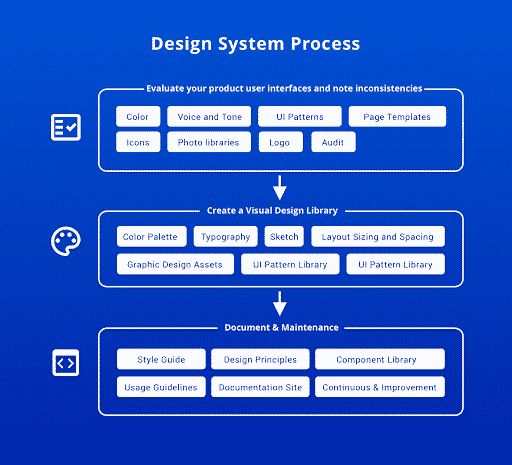 Be structured and systematic before you set the system itself

One of the first things we must remember is to get overall guidance, that will help inform us about guardrails, directions, vision, and all the associated hard lines that we need to know on the get-go.

This way, it helps acquire a certain rigor, standard, and efficiency.

Bridge the different notions into a single system

The whole concept of this is to bridge the two different notions in a single union in the entire design system.

This design concept is considered to be malleable since there are only loose conventions around what the design is in reality.

In general, a design system is shared in a centralized location that serves as the single source of data information. This design system is considered to be the authority on design questions.

A design system should be static and an artifact

This system should be static but at the same time should be an artifact as it functions as the one source of knowledge that is delegated into a fixed system or format, instead of leaving all the decision-making process to the user experience team.

Acts as the delegator

From a practical perspective, it also delegates the most updated designs and design elements like UI elements, graphics, and other static element kits.

The design system should also delegate all the directions that are needed to inform the user experience designers and design users (which include app developers). It provides data information and knowledge on how design is meant to be realized into new things, like products.

A powerful system that can perform huge tasks

A good design system is a very powerful system as it performs like nothing that any huge tasks and process or any organizations have been done for some years back. The design system creates structure, order, and replaces a huge chunk of the deal of knowledge that contains helpful directions and guidance to both the UX researchers and UX designers.

And in this ideal, creating new design elements such as components is made easy with clear and directed data information and knowledge. Designers can then spend more time innovating new ideas and tasks for app, or website.

As a whole, a UX design system creates a strong foundation for a shared understanding.

We came to realize that the design system is a vital element in producing a continuous design when developing a project product that UX designers created to cater to the feedback and the needs of their users.

Without a good design system, UX designers will find it hard to scale the user experience design.

While it is easy to do things the same way you do when it comes to conceptualizing and creating UX designs, the day will come that you will cater to a hundred UX designers and UX researchers, including a vast portfolio of project services, in which your old approach is doom for failure even before its release.

But is it necessary to scale out to teams of this size? Is it a good move to put out hundreds of applications and tools in your design portfolio?

You may have heard about people who thought that these design systems can become their own world and can blow up a cost over time.

However, you do not have to take huge steps to run an effective UX design system to produce a continuous design in product development tools. The design system should just be light enough to be effective and useful, even for smaller UX teams.