Paper prototyping is the predominant technique of low-fidelity prototyping. It is one of the most useful tools for (not only) UX designers, but its value is often underestimated. For some, it is considered to be a waste of time, because today we have countless desktop & web solutions for prototyping. But ‘Axure-like’ programs have their own limitations. Typically, designer has a short list of elements and interactions to choose from which can impose restrictions on the concept. Someone can find this helpful, but for majority it is a serious problem, especially when the team is working on a completely new solution. 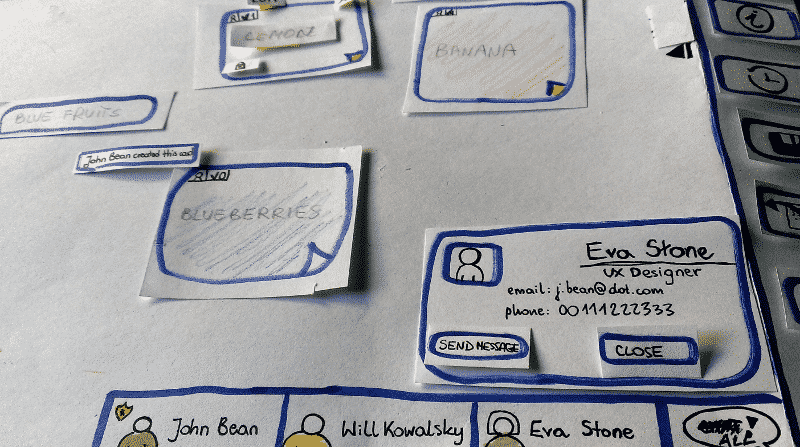 An example of paper prototyping

With blank paper on the table and pencil in your hand you let your creativity flourish. You can be fully focused on the design itself, not on the mechanics of the prototyping tool. Moreover, according to Snyder (2003), drawing, cutting and taping together a paper prototype seems to enhance creativity among the developers. The act of writing and drawing is a complex cognitive process relying on intricate perceptual sensorimotor combinations. It has been proven that the neural activity of the brain is far more enhanced while performing these activities (Mangen, Velay, 2010).

Why using paper prototyping in the computer age?

The purpose of making paper prototypes is to quickly build a model of product, which can be tested with users. Paper prototyping helps the team to experiment with various ideas and reduces the risk of misunderstanding of the general framework on early design stage, before any coding. That’s why it’s an effective way to define the problem the team is working on.

It is also a way to integrate multidisciplinary teams into development process, because this method doesn’t require any special skills. All the team needs to make a paper prototype is, of course, some paper, pencils, markers, tape and scissors – stuff which can be found at any office. Therefore, paper prototyping is considered to be a cheap method and is widely used among startups.

Paper prototype doesn’t have to be a work of art

There are a lot of myths about what a paper prototype is and what it is not. Just to clear things up – paper prototype is not supposed to be a piece of art! You do not need to have drawing skill to make a great sketch. In fact, ‘artless’ sketch is quite desired, because the attention of the users won’t be sidetracked from the real purpose of the prototype – gathering feedback of the general idea (not the drawing itself) on an early stage of design and then making as many iterations as necessary.

There is no need to prototype on paper the whole system or application. Usually, preparing a paper prototype shouldn’t take more than a few hours, but, in the end, it depends on the complexity of the interface and functionalities of the final product. A good practice is to prototype about 20% of all features which are supposed to be used most of the time.

With this method it is possible to identify most of the critical usability problems and track the user paths through a website or application. The majority of scientific researches (ex. Landay & Myers, 2001; Bailey, 2005; Walker et al. 2007; Mäuselein, 2007) show that paper prototypes and the computer-based prototypes are equally valid for testing usability.

Researchers conducted plenty of tests using common practices such as think-aloud protocols and task-based user testing. There were no differences in the number of identified usability problems. There was no clear preference among the participants for one of the prototypes. It was also claimed that paper prototypes encourage ‘nontechnical’ users to explore the model in wider range than with using computer prototypes.

However, different data show that participants were more wordy on computer prototypes (Walter, 2002). Sefelin (2003) states that testing usability on paper prototypes helps users to focus on features and on interactions. Moreover, even if users are more talkative during testing with computer prototypes theirs comments often concern nonessential, from the usability testing point of view, things such as the graphic used in the prototype.

Usability testing with a paper prototypes successfully identifies problems with navigation. Testing can be conducted in a more exploratory, dynamic way. It also verifies the understanding of terminology used in the model. Another asset is that some adjustments may be implemented directly on the prototype during the session. Project can be refined quickly and without heavy workload.

Paper prototyping has its disadvantages. It is a real challenge to properly emulate zooming, continuous scrolling or some gesture-based interactions. Such prototypes cannot be tested remotely either.

So it is important to determine what aspects of usability need to be evaluated before designers choose the kind of prototyping medium.

Sometimes re-drawing repeatable elements can be wearying, but there is a solution. The easiest way is to use a photocopier and copy the elements that have already been drawn. Another way is to use some free ‘paper prototyping kits’ (there are a few that are available online for free) and print elements like buttons or navigation bars. If you want to have a neat paper prototype, you can create one using UXPin prototyping notepads or UI stencils. These gadgets will save even more of your time.

Paper prototyping can be seen as a valuable alternative to computer-based prototyping for usability tests when you take into consideration the effectiveness in detecting usability issues, enhancing creativity and low cost of development such prototype.