UI vs UX: What is the Difference?

UI and UX are terms that are often used interchangeably. You may have read a lot of articles and resources using these terms when talking about topics in design and the likes, but these terms mean very different things. So what exactly is the difference?

If you want to know what UI vs UX means and the difference between the two terms, you are in the right place. In today’s article, UI vs UX: What is the Difference? we will be discussing the following topics:

What do UI vs UX mean?

These two have been around for decades and have been in existence in theories for centuries. Both these terms are crucial to product creation and design and both work closely together.

Despite this professional relationship, however, the roles of user interface designers and user experience designers are quite different. They have different roles when it comes to product development, process, and design.

So before discussing any further the differences between UI vs UX, it's important to know first what each term means individually.

UI as we know it stands for “user interface”. The user interface design consists of clicks on buttons, texts, images, sliders, and all elements that users interact with. These elements are considered the user interface graphical layout of an application or website.

The UI designer’s main role is to create aesthetics. They are graphic designers concerned on the application’s user interface, making sure that it is attractive, visually stimulating, and appropriately matching the theme of the app. They make sure that every single visual element looks and feels united, aesthetically, and in purpose.

The user experience lets us know how easy or difficult it is to interact with the user interface UI elements that the UI designers created.

This is where the confusion starts since both UI designers and UX designers are concerned about user interface and design, these two are often used interchangeably and most people think their meaning and the job tasks are one and the same.

Now let us dig deeper and discuss the differences between user interface and user experience.

The differences between UI and UX 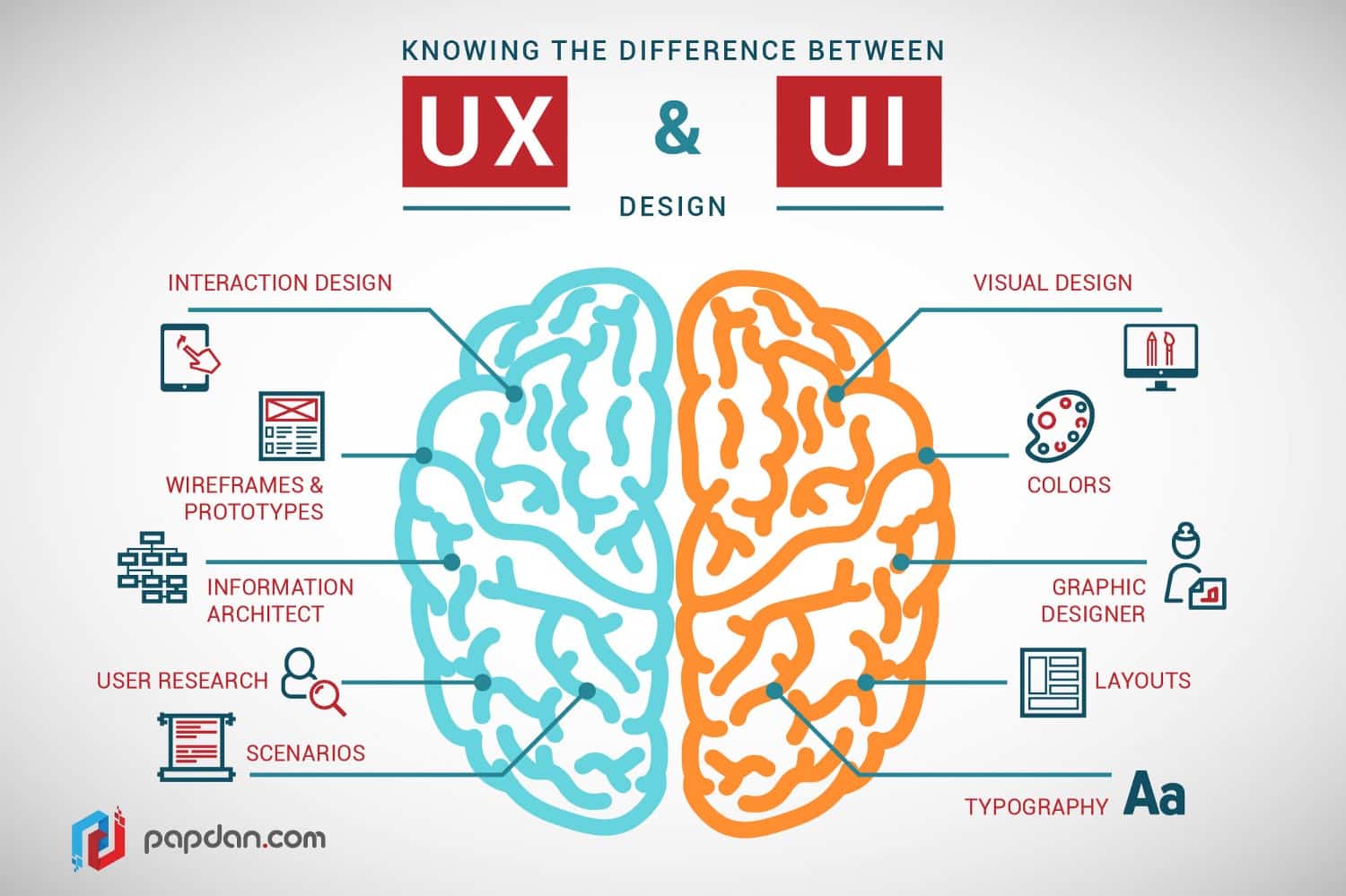 If you are still confused by these two terms, do not worry as you are not the only one.

User Interface (UI) and User experience (UX) are some of the misused terms in the field of tech and visual design.

Here are several known experts in the fields who can help us get a better understanding of the differences between user interface and user experience:

“#UX is focused on the user’s journey to solve a problem, #UI design is focused on how a product’s surfaces look and function.”  ~ Ken Norton, Partner at Google Ventures

“Start with a problem we’d like to solve. UX design is focused on anything that affects the user’s journey to solve that problem, positive or negative, both on-screen and off. The role of UI designers is focused on how the product’s surfaces look and function. The user interface is the only piece of that journey. I like the restaurant analogy I’ve heard others use: UI design is the table, chair, plate, glass, and utensils. UX is everything from the food, to the service, parking, lighting, and music.”

“#UI is the bridge that gets us where we want to go, #UX is the feeling we get when we arrive.” ~ Jason Ogle, Host and producer of User Defenders podcast

“I think one of the most important things to keep in mind in our artificially-intelligent world we’re flying headlong into, is that UI is no longer just a series of buttons relegated to the four corners of a screen–and UX is not just a screen-based prototype meant to increase conversions on a landing page.

It can also now be considered our voice and intentions powered by whatever the machines think we’re saying or wanting in any given context.

UI is the bridge that gets us to the other side of where we’re wanting to go.

UX is the feeling we get when we get there when the bridge is well-built, or plummet to our death (talk about bad UX!).

It’s also possible to have a good user experience UX without a user interface. In fact, if it’s really good, oftentimes your users won’t even know it’s there (how many knots do you notice on the wooden bridge on the way across?).

Keep in mind that we’re always creating UX, all the time whether behind a keyboard, in the grocery store line, in our workplace, or on the freeway (God help us).

To sum this up, as I always say to my super guests at the end of every User Defenders podcast episode: Keep fighting on in creating great UX for other humans!

Whether that requires a UI design or not.”

“#UI is focused on the product, a series of snapshots in time. #UX focuses on the user and their journey through the product.” ~ Scott Jenson, Product Strategist at Google

“I don’t get too wrapped up in this distinction as they frequently are used interchangeably. However, when pressed, I see the UI as focusing on the product, a series of snapshots in time.

The UX design focuses on the user and their journey through the product. The UI tends to be the specifics of screens, focusing on labels, visual style, guidelines, and structure.

The UX is the path through a product, escaping the screen and articulating the user’s journey and motivations, justifying why things are in the UI and even more importantly, why things are left out. The UI copes with constraints; the UX challenges them.”

"A User Interface (UI) without UX is like a painter slapping paint onto canvas without thought; while #UX without #UI is like the frame of a sculpture with no paper mache on it." ~ Rahul Varshney, Co-creator of Foster.fm

“User Experience (UX) and User Interface (UI) are some of the most confused and misused terms in our field. A UI without UX is like a painter slapping paint onto a canvas without thought; while UX without UI is like the frame of a sculpture with no paper mache on it. A great product experience starts with UX followed by UI. Both are essential for the product’s success.”

“#UI is the saddle, the stirrups, and the reins. #UX is the feeling you get being able to ride the horse.” ~ Dain Miller, Web Developer

"Despite how simple that may have sounded, there are many complications and misconceptions when it comes to the differences between UI and UX design, and they cause the design community to go into quite a stir whenever they are brought up.

More pointedly, good user experience is the art of a drill going through wood, or a surfboard gliding through water effortlessly. The feelings those give you is unparalleled because they just work, simple as that. Though, in contrast, the shape of that board that helps it make those turns on the wave is good UI, and the surfwax on the top so you don’t slip off is also good UI. In short, the ENTIRE package is what makes it good UX, whereas good UI is always a very important inner-element of that."

Let’s enumerate the roles for a UI and UX to properly differentiate the two:

UX design is focused mainly on the user’s expectations of a product or app. The goal of a UX designer is to locate and solve the problems that the customers are struggling with.

On the other hand, a UI designer is responsible for adopting what UX designers created. UI design creates the product’s or app’s interface based on the given requirements, design theories, standards, and suggested aesthetics.

UI designer's focus is the product layout to properly guide the users to take the desired actions designed by the UX design team.

The UI designer's combines elements like graphics, interaction, motion, and branding design to create the best layout in terms of use and look.

Their job is to turn the design concept into an attractive, useful, and responsive interface for users.

On the other hand, the UX designers’ backbone is the audience. The job of UX designers is to conduct UX design research, testing, and experimentation to learn and improve the user experience.

The UX team studies the behaviors, interactions, and reactions of a user throughout the user experience journey.

When the two roles combined 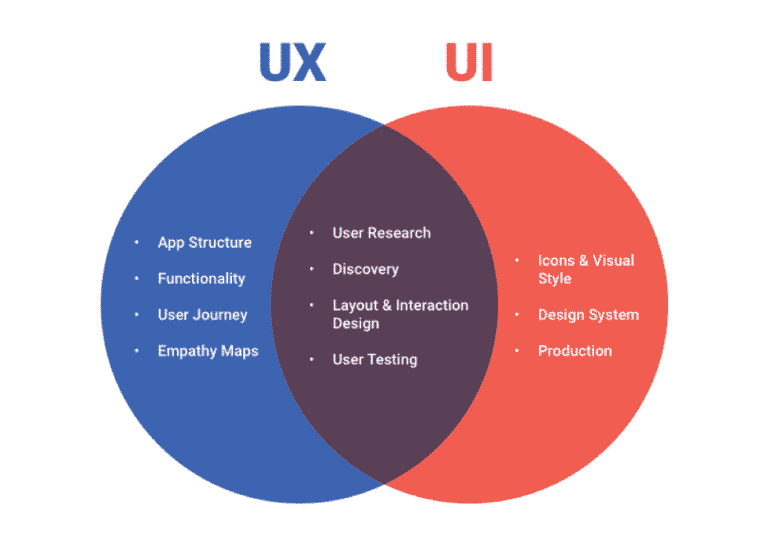 Is UI part of UX, or vice versa? Both user interface and user experience roles are related to design disciplines. In the tech and design industry, we often see these roles mentioned together, this is because the two roles have a lot of overlapping jobs to create a successful product.

Both share the same goals, responsibilities, and ways of thinking. We can say that UI and UX, though have similarities in jobs, still functions differently. And although there’s a thin line that separates the two roles, both work well together.

But what comes first: UX or UI? When it comes to creating a product design, UX comes first than UI.

UX and UI working together

As discussed, the UX and UI roles involve different skill sets. If you wonder which is better UI or UX? And in terms of career, which is more important a UI designer or a UX designer? Both roles are.

They are both integral to each other’s success. A beautiful design is nothing with a clunky interface or confusing navigation. On the other hand, a brilliant, well-researched UX plan won’t be successful with bad visuals and interface.

Having said that, when it comes to designing UX and UI, the tasks involved need to be properly executed and aligned well with the created user expectations to design an excellent U I experience.

By now, I hope that you have understood the differences between UI vs UX design. They go hand-in-hand, but still, they are different.

· UX design is about identifying and solving user problems. On the other hand, UI design focus on creating aesthetic and interactive interfaces.

· U X design comes first in the product design process, then followed by UI design. This is because of UX designers first map out the steps of a user journey before the UI designers step in to do the visuals and interactive elements to make the UX map become a reality.

· UX and UI roles can overlap, even with identified roles since both roles are based on design disciplines.

· Both roles are important and can work together to achieve a good product design.

When it comes to choosing your career path between UI designers and UX designers, it's important that you define the type of design that you find most interesting. This way, it will be easier for you to hone those skills to create better design solutions.